It is a beautiful, although cold, Sunday morning here in WNY.  The super blizzard that hit much of the northeast missed us. 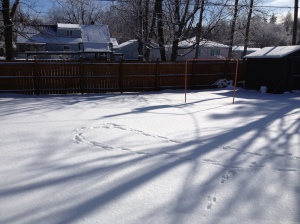 An aside on snow in Buffalo.  The City of Buffalo rarely gets all the snow in this area.  The most snow falls to the south of Buffalo in an area known as the “Snow Belt.” This area begins about 15 miles south of the City.  The snow fall gets heavier as you move south because of bands of snow coming off of Lake Erie, called Lake Effect snow bands.  In the winter the prevailing winds are mostly from the north west resulting in the snow fall to the south.  The same happens in Erie, PA.  My town is on the northern end of the snow belt.

This blizzard was caused by an actual storm rather than lake effect snow.  It went to the north of Buffalo, so areas north of the City got more snow than usual.  We got about 6 inches, which is really nothing for this area.  Streets are clear and the sun is out.  Business as usual in this area.

What was I writing about? Oh yeah, a beautiful Sunday morning.  Sitting in my warm house reading the paper, with the sun is shining outside.  I would prefer to be outside in the warm sun reading the paper, but that will have to wait a few months, or at least until we go to Florida for vacation.

Let me know what you think Cancel reply

Other Sites of Note